A guide on how to include history modifiers in your formulas in Plecto.

What is a history modifier?

The available time periods are Day(s), Week(s), Month(s), Year(s). The historical data the formula calculates from your data source is relative to the time period selected on the widget.

By adding a history modifier to a data function component, you can count the number of sales deals from the previous 5 days. The formula would look like the following:

This history modifier will look at historical data from five days ago.

Let's break down how a dashboard widget would display data from the formula above if different time periods are selected.

Where can I use a formula with history modifier?

It is common to use formulas with history modifiers on widgets that can display a minimum of two formulas, such as the number box, speedometer, line and area charts, and the table widget.

See the performance today compared to yesterday on the same dashboard widget. The easiest way to create this KPI is by copying an existing formula, adding a history modifier to the duplicate, and adding both formulas to a widget. Here are the steps: 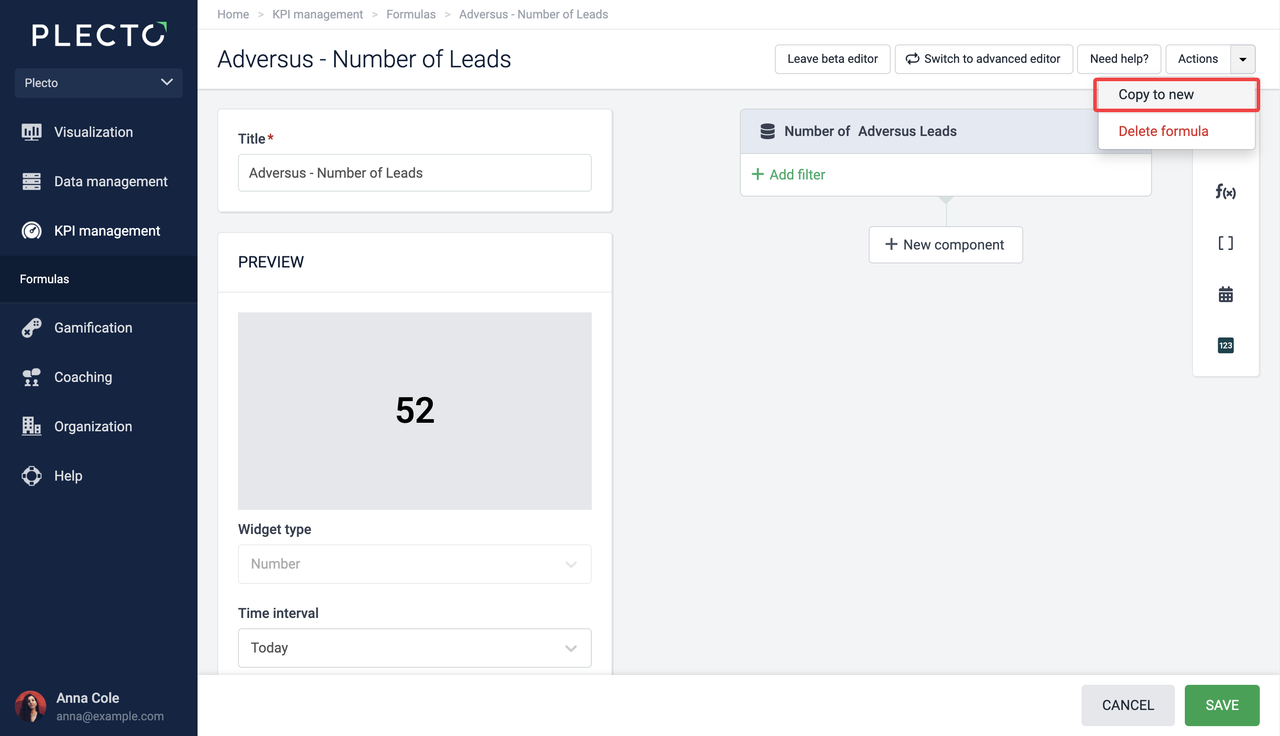 2. Rename and add a history modifier to the copied formula. 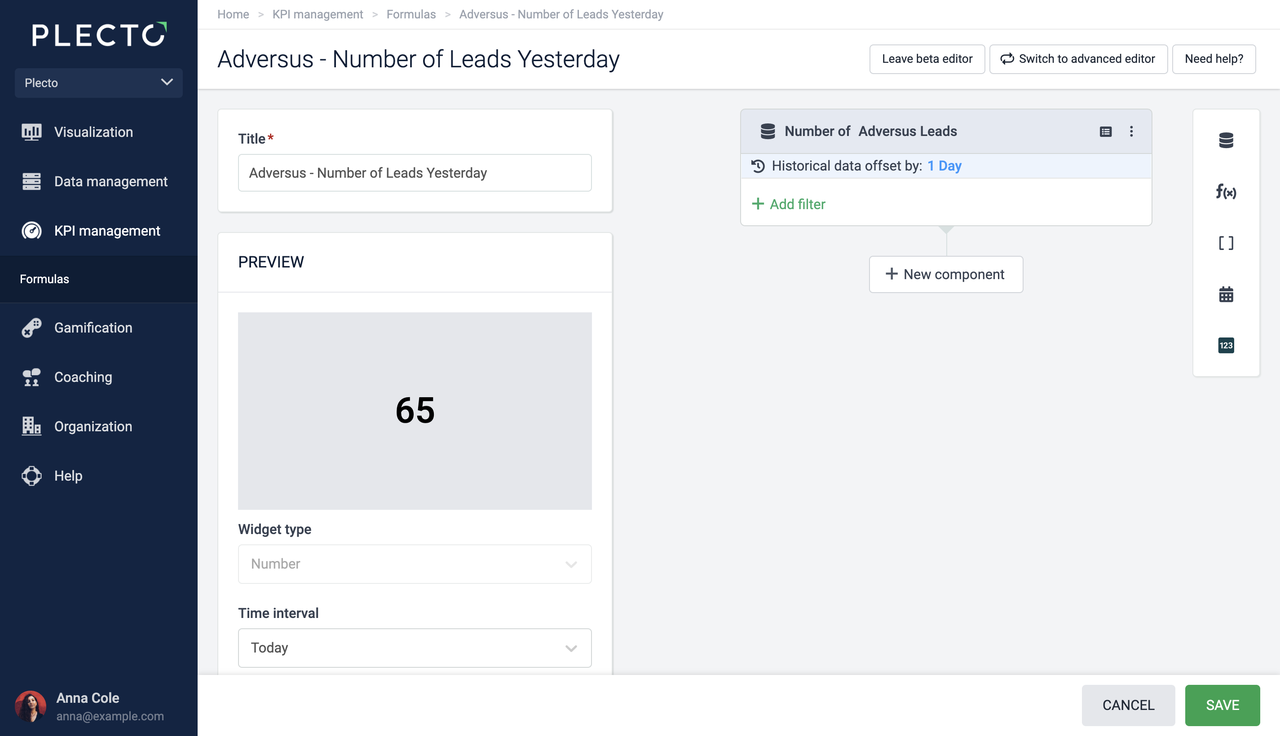 3. Add both formulas to a widget such as the number box. Set the time period to Today.

See your performance this month compared to the same month last year. The easiest way to create this KPI is by copying an existing formula, adjusting the duplicate, and adding both formulas to a widget on your dashboard. Make sure to set the time period on the widget to Current month. Here are the steps:

2. Rename the copied formula.
3. Duplicate the component – click on the three little dots in its top-right corner.
4. Add history modifiers to the components as shown in the image below.
5. Change the operator to minus ➖. 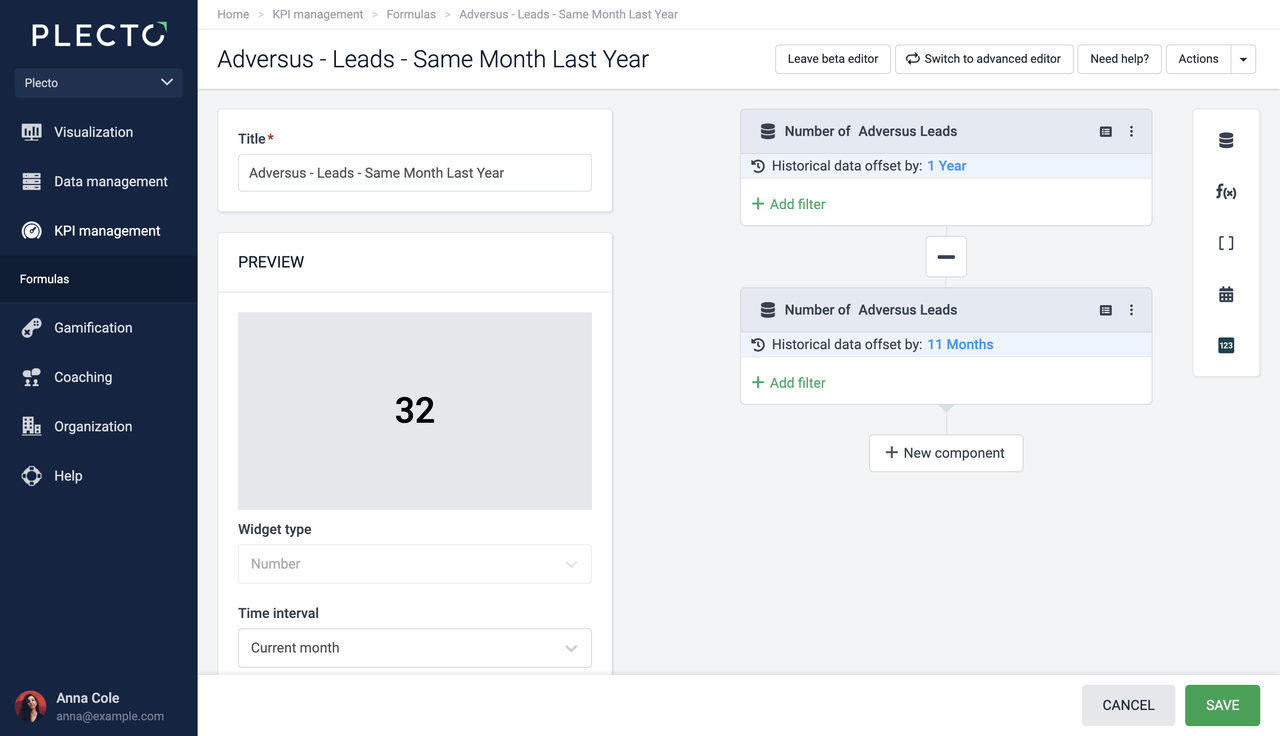 6. Add both formulas to a widget. Set the time period to Current month.

Assume you have a manual data source containing all your employee targets, but there is only one registration per employee that gets updated if the target changes. Knowing that each registration has a date field linked to it, if a registration does not get updated for a while, it might not fit within the time period selected on a widget and therefore not display the target.

To go around this limitation, you can add a history modifier to the formula to display the employee target even if it is outside the selected time period on the widget. To do so, you should create a formula using the Last data function.

Be aware of the scope

In this formula, you can freely decide how much of the historical data you want to draw. If you know that the employee targets get updated rarely, you can add more time to the modifier, for example, 3 years. See the formula below: 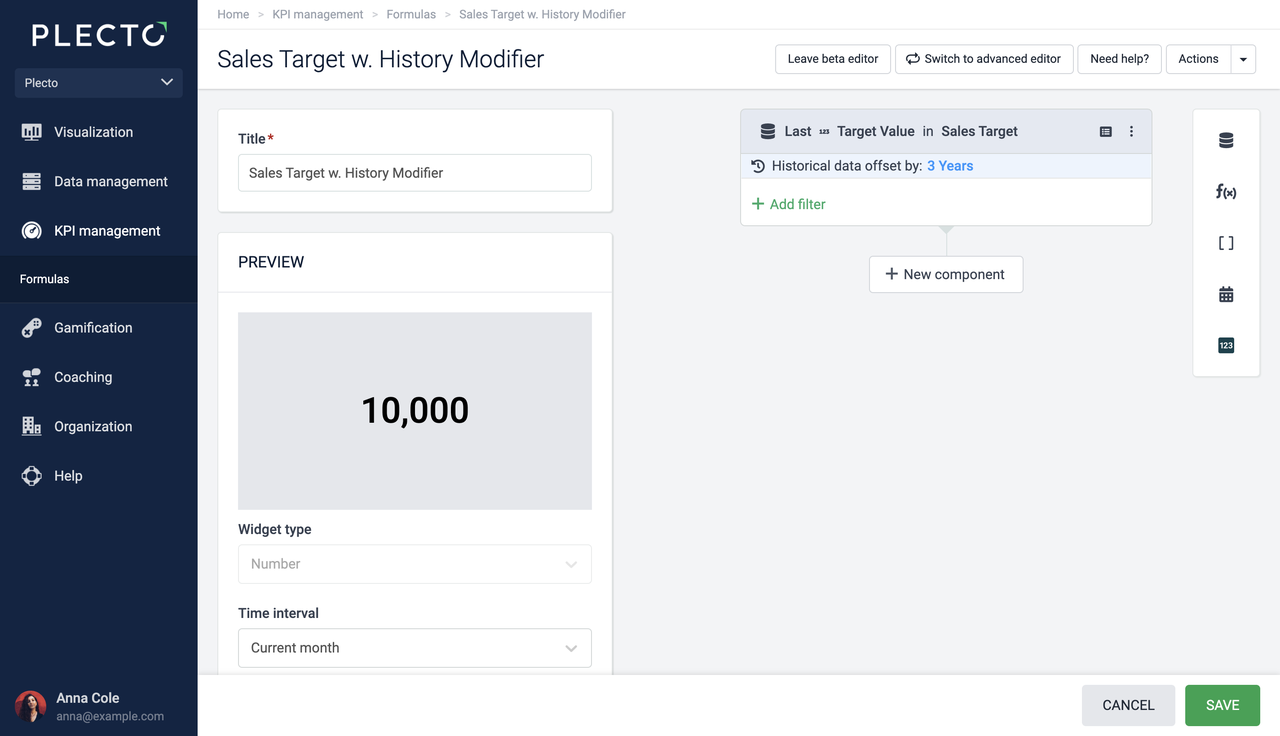 The video below shows how to create formulas in the advanced editor and see the number of leads on the current day compared to the previous day.