A guide on how to use the date and history modifiers to return data from another date field or a different time period.

All data functions in the formula editor allow adding modifiers. The modifiers give advanced functionality to the formulas in Plecto as they tell the formulas to look at data from another date field or from a different time period. These modifiers are:

Know the default date in your data source

Let's say you want to display the total value of sales deals with the status "won" that are closed within the current month (September). Knowing that the default date in the data source below is "Created date," a formula summing the value of won deals would return 0, because the registrations were created in the previous month (August).

However, if we change the date field in the formula editor, it will shift the formula's focus to search for values based on the "Closed date" field instead and display 1320 as required. The formula would look like the following.

In this example, the date modifier is necessary because it enables Plecto to generate the right metrics. Here is an example of how to add a date modifier to data function components in the formula editor:

The history modifier manipulates the formula to include data from a time period in the past, outside of what you can select on widgets, reports, notifications, or other places where formulas are used. With history modifier, you can see your metrics for the previous 5 days, 2 weeks before the beginning of the current month, same month last year, and more. The available time periods are Day(s), Week(s), Month(s), Year(s).

The history modifier enables Plecto to display metrics based on different time periods on a single dashboard widget. It is common to use formulas with history modifiers on widgets that can display at least two KPIs, such as the number box, speedometer, line and area charts, and the table widget. 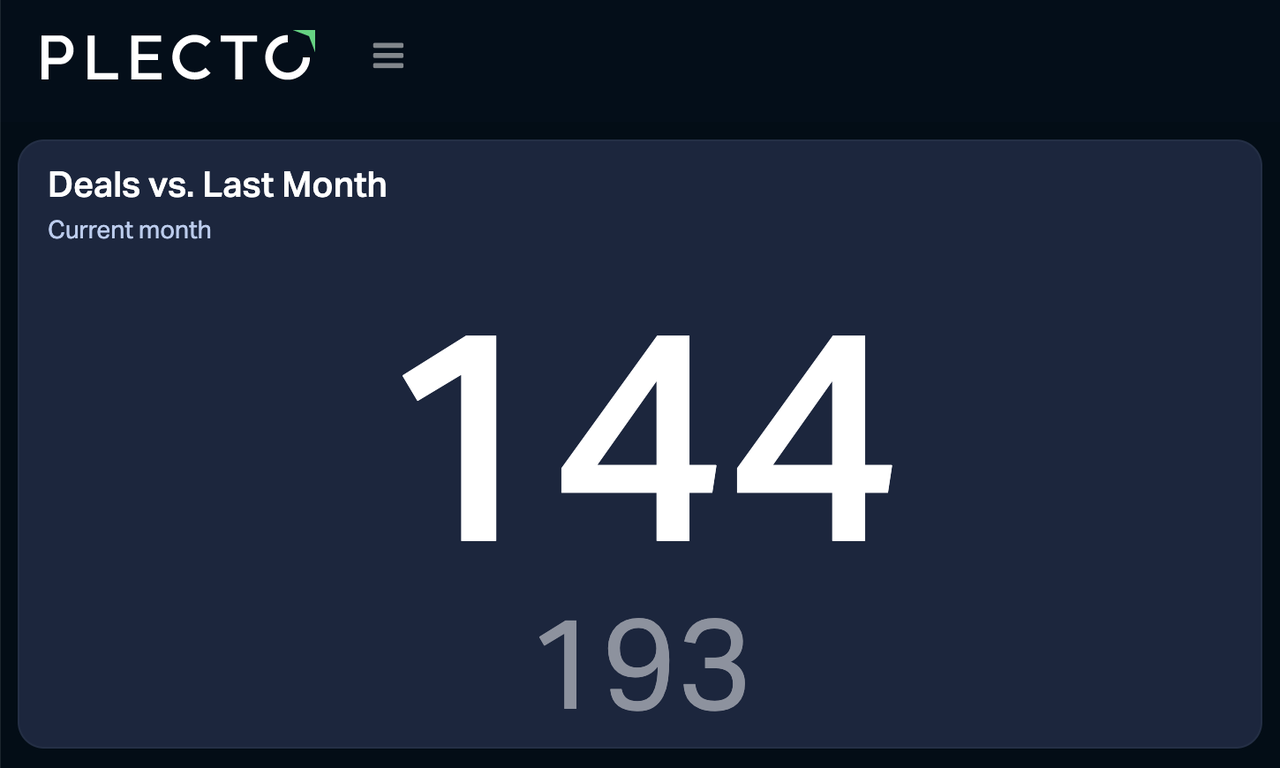 An example of a number box displaying data for the current week compared to last week.

Imagine you want to count the number of sales deals for the past* 5 days from a data source called "Deals." The formula would look like the following:

*The "past" period is relative to the time period selected on a widget or feature. Let's break down how a dashboard widget would display data from the formula above if different time periods are selected.

Tip: Give clear titles to your widgets

If you apply history modifiers to your formulas, Plecto will show other metrics than what is indicated in the time period display (current day, current week, etc.). Therefore, we recommend you to give your widgets clear titles that best describe the displayed data, for example, "Number of Deals vs. Previous Month."